Inherent prepositions are interpreted in relation to the dimensional properties of the reference object (the complement of the preposition). The four subsets in (215) can be distinguished; these will be discussed in the following subsections.

Example 215
Inherent prepositions:
readmore
[+]  I.  Prepositions that denote a set of vectors

[+]  A.  Prepositions situating the located object with respect to the dimensions mentally attributed the reference object.

Section 1.3.1.2.1 has shown that the prepositions achter'behind', naast'next to' and voor'in front of' can be used both deictically and inherently. The inherent uses of these prepositions are illustrated again in Figure 18.

Although the examples in (217) imply that Jan is situated in similar positions with respect to the two screens, antonymous prepositions are used. The reason for this is that achter is also used to indicate that Jan is operating the reference object. This will be clear from the following examples.

Another preposition that belongs to this group of inherent prepositions is tegenover'opposite'. It differs from the prepositions achter, naast and voor in that it refers not only to the orientation of the reference object but also that of the located object; it expresses that the located object faces the front of the reference object. This can be made clear by means of example (219a). This example refers to the situation in Figure 19A, in which Jan and Peter are facing each other. Of course this situation can also be described by means of example (219b), but the difference between the two is that the orientation of the located object is not relevant in the case of voor; as is shown in Figure 19B, (219b) can be applied to a wider range of situations than (219a). 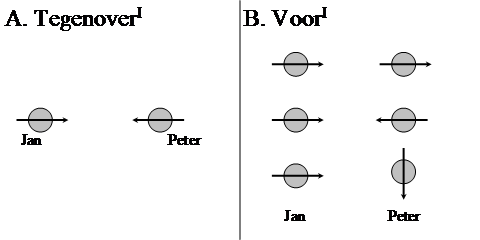 In connection with this difference between tegenover and voor, it can be noted that the relation expressed by the former is reflexive, whereas this does not hold for the relation expressed by the latter. This is clear from the fact that we may conclude from (220a) that (220a') holds as well, and vice versa; the difference between the two examples is mainly one of prominence. From (220b), on the other hand, we cannot conclude that (220b') holds.

It should be noted, however, that there are cases in which the conditions on the use of tegenover seem less stringent than in (219a). Example (221a), for example, seems acceptable, although a tree is normally not construed as an object with a front and a back. One may even use (221b) to refer to a situation in which the front of the car is not directed towards the church. We can perhaps conclude from these examples that only the orientation of the reference object is crucial, and assume that (219a) is a special case. We leave this for future research.

Example 221
[+]  B.  Prepositions situating the located object with respect to the physical dimensions of the reference object

The discussion in the previous subsection has shown that the interpretation of achter, naast and voor is independent of the dimensional properties of the reference object. This does not hold for all prepositions. The preposition langs'along', for instance, is generally interpreted with respect to the length dimension of the reference object (note in this connection that langs is probably derived from the adjective lang'long'): in terms of vectors, we could say that langs denotes a set of vectors that are more or less parallel, that is, are all perpendicular to the exterior of the reference object. Like achter, naast and voor, the preposition langs can be used to denote either a location or a change of location (cf. (222)). 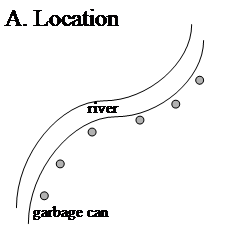 Sometimes the importance of the length dimension of the reference object is weakened. Some examples illustrating this are given in (223). Further, it should be noted that the preposition langs can sometimes also be used directionally; cf. example (263 in Section 1.3.1.3, sub II).

To conclude the discussion of this group of prepositions, it should be noted that it is not easy to work out the idea that these prepositions denote a set of vectors. In the first place, it is not clear what the starting point of the vectors is. Of course, we could make the idealization that the reference object is a point in space, which the vectors take as their starting point, but this would not help us in the case of binnen. Another possibility would be to assume that the positions in the relevant region are defined by means of the shortest vectors from the reference object to the positions in question; cf. Figure 22. This would solve the problem that, despite the fact that the magnitudes of the vectors 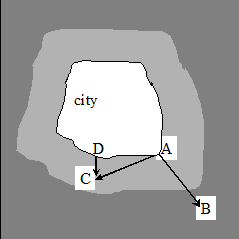 This solution to the problem does not, however, solve the problem that neither the direction nor the magnitude of the vectors denoted by binnen'inside' can be modified. For this reason, it has been assumed that binnen actually involves a null vector as well. Since we can offer no account for the facts that led to this assumption, we have to leave this problem for future research. See Subsection II for the difference between in/uit and binnen/buiten.

[+]  A.  Prepositions that situate the located object (partly) in the reference object 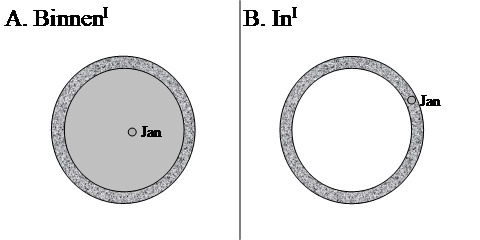 A caveat is in order, however. Example (226a) can be represented by making use of only two dimensions. When we are dealing with a three-dimensional object, on the other hand, the situation is slightly different. Given that it is the preposition in, and not binnen, that is used in the examples in (227), we conclude that the inside of a three-dimensional object is mentally construed as a part of the reference object rather than as its interior region.

Like in but unlike buiten'outside', uit'out of' implies that there is some physical contact with the reference object. For this reason, buiten can, but uit cannot be used to refer to the situation depicted in Figure 24. Actually, uit cannot be used at all in (228b), since, when there is physical contact with the reference object, in will take precedence over uit; cf. Jan zit in de haag. 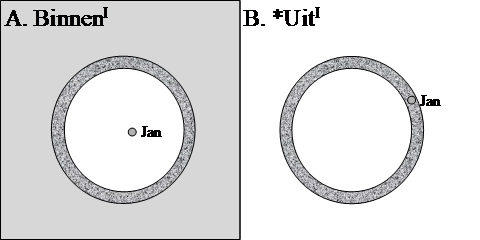 The discussion above shows that the preposition buiten is normally preferred to uit with stative verbs of location. Example (230b) shows, however, that the preposition uit is possible if we use a verb of change of location like halen'to get', whereas buiten is not allowed in this context. This is due to the fact that this verb expresses that the contact between the located and reference object is broken. For completeness' sake, we show in (230a) that the antonym of halen, stoppen'to put', licenses in only. 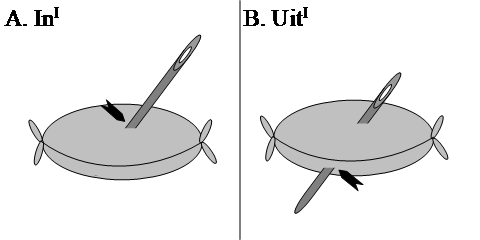 In and uit differ in that the former is compatible with full encompassment, whereas the latter necessarily implies partial encompassment. This is clear from the fact that the adverbial phrase helemaal'completely' can be used with in, but not with uit (unless we are dealing with an overstatement). Note that, as expected, substituting bijna helemaal'nearly completely' for helemaal in (231b) will give rise to a fully acceptable result. A modifier like een klein stukje'a small piece', which expresses that the encompassment is not complete, is possible with both PPs.

The examples in (230) have already shown that the prepositions in and uit can also be used to denote a change of location; cf. Figure 26. Some more examples are given in (233): in (233a) the reference object refers to the new position of the located object, and in (233b) it refers to its original one. In this case, the adverbial phrase helemaal'completely' can be readily used with both PPs; helemaal in (233b) expresses that the contact between the located and the reference object is completely broken. 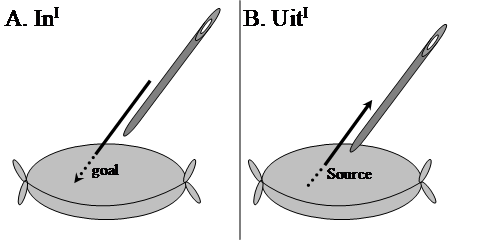 The preposition door in a sense combines the meanings of in and uit. In (234a), the PP door het speldenkussen expresses that the located object sticks both in and out of the reference object; in other words both points indicated by means of the arrows in Figure 27A are relevant. In (234b), the PP indicates that the located object ends up in the position in Figure 27A as the result of Janʼs action; this is shown in Figure 27B. 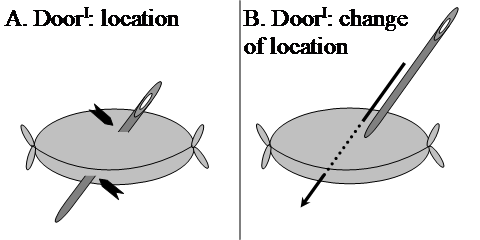 The prepositions in and uit, on the one hand, and door, on the other, seem to differ in that the former can only be used in constructions involving (change of) location, whereas the latter can also occur in directional constructions. This is clear from the examples in (219) involving the verb of traversing rijden'to drive'; cf. Section 1.1.2.2. Whereas the examples in (235a) are marginal at best, (235b) is fully acceptable. The primed examples show that the intended directional meanings can (also) be expressed by using the adpositions in question as postpositions.

There is, however, a slight meaning difference between (235b) and (235b'), although it is hard to pinpoint it. Perhaps another example can clarify it. When Jan is driving on an unfenced path which at a certain point ends at a meadow, and Jan drives right through the meadow to a path on the other side of it, one would use the preposition rather than the postposition door, as is shown in the (a)-examples in (236). The contrast becomes even clearer if the reference object is an entity with a relatively small size, like a puddle of rainwater. However, if the unfenced path enters a wood, and Jan drives right through it, one can also use the postposition, as is shown in (236b'). This may suggest that in order to use door as a postposition the located object must be completely encompassed by the reference object, whereas this need not be the case if it is used as a preposition. We leave this to future research.

Example 236
[+]  B.  Prepositions that imply contact between the located and the reference object

Whereas in, uit and door imply that the located object is at least partly located in the reference object, the prepositions aan, op, over and tegen in (237) merely require that there be some contact between the two.

Note that it has also been claimed that the preposition aan expresses minimal distance, not minimal contact. Examples that would favor this are given in (238): these examples do not imply physical contact between the ship and the quay, or the house and the lake. If this is the proper characterization then aan must be assumed to denote a set of vectors which are smaller than a certain contextually determined magnitude, just like bij'near' shown in (224); aan and bij differ, however, in that only the former is compatible with physical contact.

The examples in (237b&c) perhaps suggest that op and over imply some notion of full contact. That this is not the case will be clear from the examples in (239); example (239a) suggests that only the bottom of the lamp is in contact with the table (cf. Figure 7A), and (239b) is compatible with a situation in which the chair is only partially covered by the coat.

In (237a-c) the PPs headed by aan, op and over refer to a location. The examples in (240) show that these PPs can also be used to indicate a change of location.

The preposition tegen'against' is more difficult to characterize. It is often used in the sense of “touching the side surface of the reference object”, as in (237d), but resultative constructions such as (242) are possible as well.

These examples suggest that tegen means (or may also mean) something like “touching the reference object while exerting force on it”, which would fit in nicely with the non-locational uses of tegen in examples such as (243). 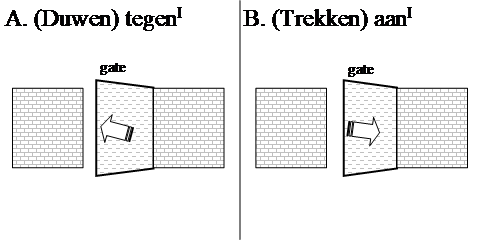 Figure 29: Tegen 'against' and aan 'on'
References:
⇑ Back to top
ABOUT THIS TOPIC
Author(s):
Hans Broekhuis
Category:
Dutch Syntax
Publication date:
14 May 2020
Keywords:
Adpositional PhraseAdpositionsInherent InterpretationSpatial Adpositional phraseaanachterbinneninoveruit
This topic is the result of an automatic conversion from Word and may therefore contain errors.
A free Open Access publication of the corresponding volumes of the Syntax of Dutch is available at OAPEN.org.
cite
print
report error
Jump to: