Phonotactics deals with the question as to whether a particular syllable is well-formed in a given language. As can be seen from the examples in (1), Dutch allows for a relatively complex syllable structure with complex onsets (see 1a) and rhymes that can contain complex codas (see 1b).

There are phonotactic restrictions on the wellformedness of any constituent of a syllable. Consonant sequences in onsets and codas are determined by the so-called Sonority Sequencing Generalization, which is given below:

Sonority Sequencing Generalization
Between any member of a syllable and the syllable peak, a sonority rise or plateau must occur (Blevins 1995:210;see also Clements 1990).
Figure 1 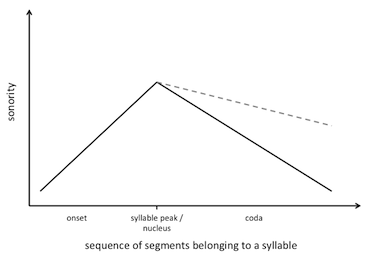 In other words, complex onsets with rising sonority, e.g. /pl-, tr-, kn-/, and complex codas with a falling or a level sonority contour, e.g. /-mp, -rt, -lk, -rn/, are preferred. This is illustrated in the following two (schematic) figures for the examples krant /krɑnt/ newspaper (rising and falling sonority) and hoorn /horn/ horn (level sonority contour in coda). 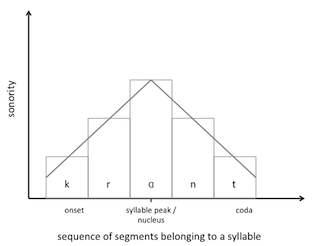 Moreover, co-occurrence restrictions within rhymes and between onsets and rhymes, so-called pansyllabic constraints, can be found in Dutch.