The pronunciation of the vowel /ɛ/ constitutes a special ethnolectic and geolectic characteristic of Afrikaans. Especially in the northern parts of South Africa (former Transvaal and Free State), [æ] is an allophone of this vowel when preceding one of the coda consonants /k/, /x/, /l/ and /r/, while in other regions, predominantly the Cape Provinces, this is not precisely the case. On the other hand, this allophonic phenomenon is largely absent in the Afrikaans as spoken by most coloured speakers, irrespective of geographic region. Only in words containing /ɛ/ when followed by the lateral consonant /l/ is a lowered and palatalised version observed in their Afrikaans, roughly transcribed as [jæ].

The allophone [æ] of the mid-front vowel /ɛ/, when followed by /k/, is signalled as long ago as 1927 by Le Roux and Pienaar (1927) as restricted to the then Western Transvaal (part of the current North-West Province). They cite only two instances: lekker /lɛkər/ [lækər] nice and rekker /rɛkər/ [rækər] toy, but denote the onset consonants /l/ and /r/ as conditioning factor. Since then this phenomenon has seemingly expanded to a large extent. De Villiers (1970) and also De Villiers & Ponelis (1992) report this lowering effect in the general koine style over a large region of South Africa. Note, however, that it is widely held that it is generally accepted to be caused by the following consonants, as mentioned above. Wissing (2017a) gives a general overview of this process, and in Wissing (2017b) the presence of this type of lowering in Genadendal Afrikaans is described, as representative of Cape Afrikaans and as spoken by a the coloured inhabitants of Genadendal, Western Cape.

Some radio presenters of RSG exhibit an interesting phenomenon regarding the production of /ɛ/ in the above-mentioned context of /k/, /x/, /r/ and /l/. In short, they exclude /k/ as a lowering context. Thus lowering does happen in the words sleg /slɛx/ bad > [slæx], bel /bɛl/ ring > [bæl] and ster /stɛr/ star > [stær], but not in words like ek I. In Figure 1, the vowel portions of these words are shown. Note the difference between the formant tracks of the first three vowels [æ] compared to that of ek, which is [ɛ]; in fact, the quality of the latter approaches that of a high-front vowel [i]. This can clearly be heard in the following sound file of the four respective words, as read by one of these presenters:

Figure 1: The /ɛ/ vowel, as used by a radio presenter in the words sleg, bel, ster and ek 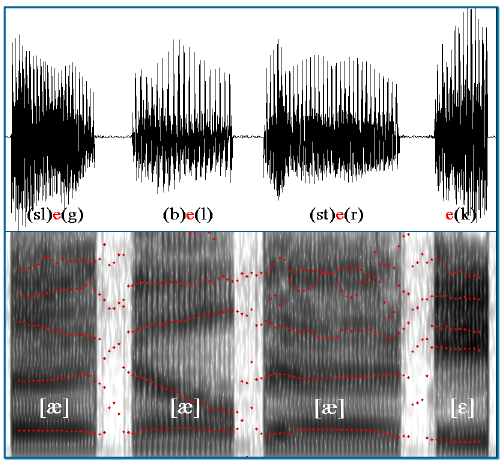 Listen to the following sound file:

Notably, this speaker is from Paarl, Western Cape, and, according to her own testimony, has never spent any significant periods of time outside of this region. A similar trend is to be observed in the case of some other speakers of this area. The resistance of /ɛ/ against lowering in this case might possibly be seen as a shibboleth of the Standard Afrikaans of Western Cape speakers.

In Table 1 more examples of these types are given.

As stated above, ethnolectic and geolectic characteristics play a definite role in the occurrence of the lowering or not of /ɛ/ to [æ]. Figure 2 presents the measurements of the first formant, F1, of the productions of /ɛ/ by two prototypical speakers, viz. a white North-Eastern Afrikaans speaker (NEAfr.) and a coloured speaker, representing Cape Afrikaans (K-Afr.).

Figure 2: F1-measurements of typical /ɛ/ vowel, as spoken in the word ses /sɛs/ [sɛs] by both speakers, as well as werk, snelweg, trek (NEAfr.-speaker), and spel, ver, ek, berg (K-Afr.-speaker) 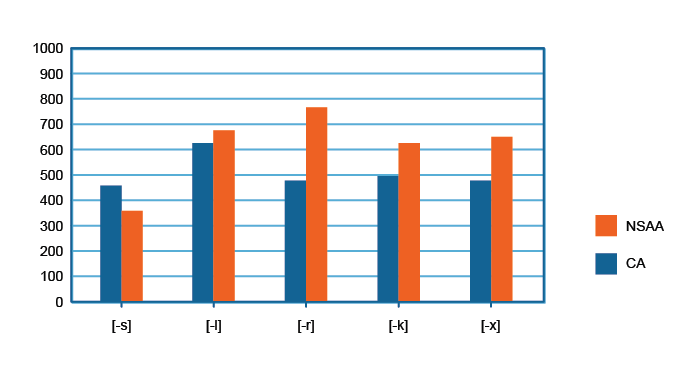