Next to schwa, /ɑ/ is the most frequently used Afrikaans vowel phoneme, and is a member of the set of short vowels, /i/, /y/, /u/, /ɛ/, /ɔ/, /œ/ and /ә/ (Le Roux and Pienaar 1927; Van Wyk 1977; Coetzee 1982; De Villiers and Ponelis 1987; Combrink and De Stadler 1987; Wissing 2017). It is invariably spelt with the letter a, as is evident in the following examples: agter /'ɑx.tәr/ behind, tak /tɑk/ branch, gogga /'xɔ.xɑ/ insect. Except for being found in common words such as these, it often appears in the endings of words of female person names, such as Maria, Marna and Alberta. As such, /ɑ/ is pronounced as short in word final position, similarly to Flanders Dutch. See Taalportaal (Dutch) in the section Phonological analysis of /a/ where it is stated, with regard to the pronunciation of /a/ as short /ɑ/, that "it seems ... that  [ɑ] at the end of the word is only found in Flanders".

It is important to note that the positions of this short vowel (central-front) and the long low /a/ (central-back to back) of Afrikaans are the inverse of this pair of vowels in Dutch, where the short /ɑ/ is produced more to the back of the mouth than the long /a/ which is to the front.

The Standard Afrikaans (SAfr.) speaker referred to below is a prototypical standard speaker and a prominent radio personality. In a recent survey she was nominated as the most appropriate speaker of Standard Afrikaans. Participants (N = 344) in this survey were from all walks of life, male and female and of different ages and ethnicity groups. the /ɑ/ of Standard Dutch (SNdl.) is shown alongside that of SAfr.. Vowel information with respect to SNdl. was found in the description of Dutch /ɑ/.

Where relevant, acoustic vowel information on Afrikaans as spoken in Genadendal, Western Cape (henceforth abbreviated as GDAfr.), is provided. On the basis of its important role in the historic evolution of Afrikaans, it is considered here to be a prototype of coloured Afrikaans (CAfr.). There are of course many other variants of coloured Afrikaans. The above mentioned information is based on recordings of a number of aged female speakers of Genadendal.

The short /ɑ/ is produced on the horizontal dimension in a central position. The jaw is dropped, which causes the mouth to be relatively open. Consequently it is described as a short low-central vowel. Figure 1 below is an idealised depiction and is thus somewhat misleading with respect to Afrikaans /ɑ/ and /a/, as stated above. See Figure 2 below for an acoustic plot providing a more realistic representation. 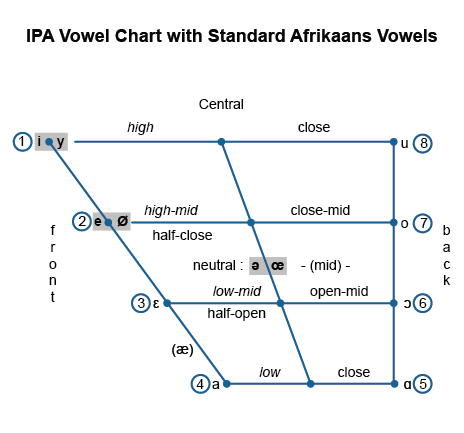 [click image to enlarge]
Both the alternate sets of tongue height positions are indicated: those in italics (high – low) show the height of the tongue in relation to the oral cavity; those in normal letter type (open – close refer to the degree of openness of the mouth during pronunciation. The latter set is used here and elsewhere.
[+]Acoustic features

The formant frequencies as well as temporal values of vowels vary per speaker based on age, gender, speech community, and also according to speech rate and style. Vowel durations as well as quality tend to reduce in rapid speech and in informal style, thus generally becoming shorter and tending in the direction of schwa.

The phoneme /ɑ/ is a short vowel. An average duration of 81 ms was found for the SAfr. speaker, measured in the phonetic context /s_s/, read in a wordlist style.

The following table and set of figures highlight the formant features of /ɑ/. Where applicable it is compared to that of Standard Dutch (SNdl.) as well as to CAfr. Vowel information with respect to SNdl. was found in the description of Dutch /ɑ/.

Figure 2 is based on the formant values given in Table 1. It provides an acoustic plot of the Afrikaans vowels as produced by the prototypical standard speaker mentioned above. 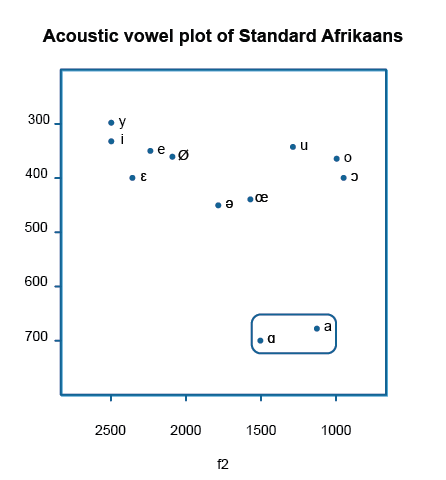 Normally formant characteristics of vowels are visible from their spectrograms, especially with regard to their formant tracks. Figure 3 shows the vowel /ɑ/ as embedded in the nonsense form /s_s/, here /sas/ [sɑs]. Here the relevant information concerning long /a/ is added for comparison.

Figure 3 portrays wave forms (A) of the nonsense words /sas/ [sɑs] and /saas/ [sas], and their spectrograms (B).

Listen to the pronunciation of the two nonsense words that were used in producing the waveform and the spectrogram.

Figure 5 below shows the formant tracks of the vowel /ɑ/ as produced in the same phonetic context as in Figure 3, viz. /s_s/. It gives the F1/F2 values of this vowel as provided in Table 1. F3 is added to the plot, but merely for secondary reasons.

Table 2: Formant frequency values of /ɑ/ in Standard Afrikaans and Standard Dutch
Formant plots of /a/ and /ɑ/
Figure 4

[click image to enlarge]
F1 is the red track at the bottom of the figures, F2 is the green track (and F3 the black one at the top). A higher F2 in the case of /ɑ/ clearly reflects a less back character. Furthermore, the straightness of /ɑ/ shows it to be a true monophthongal vowel. This is less the case with long /a/.
[+]Phonological analysis of /ɑ/

The phoneme /ɑ/ is particularly susceptable to reduction to schwa ( /ә/) in high frequency words, especially in unstressed position, as in vakansie > [fә.'kɑn.si] holiday, and vandag today> [fәn.'dɑx].

Although nasalisation of all Afrikaans vowels has been a distinct characteristic of the vowel system for much of the past century (cf. Le Roux and Pienaar 1927) it seems to be much less the case in recent years, especially in the speech of younger persons. Practically no evidence is found in coloured varieties, as is evident in the pronunciation of Genadendal Afrikaans speakers. Obviously this applies to /ɑ/ as well.

The phoneme /ɑ/ is frequently attached to proper names for people in order to express tenderness (for example in Boeta < Boet, and Dana < Daan).

The short /ɑ/ occurs in every syllable nucleus position and thus not only in unstressed syllables, as in the case is in Dutch (cf. Afrikaans patatta /pɑ.'tɑ.tɑ/ sweet patato). The vowel in wordfinal position in padda would have been long were this a Dutch word; in Afrikaans this vowel, in singular padda, plural (paddas) and diminutive (paddatjie) forms, is phonetically short. Given the absence of vowel variation (as thus no overlap with long /a/), there is no motivation for the classification of unstressed /a/ in wordfinal position as long, as in Dutch. Of course, underlying long /aa/ in this position is always stressed, e.g. in karba /kɑr.'ba/.

Phonetic evidence in favour of the acceptance of /ɑ/ as short in both stressed and unstressed syllable, closed as well as open, comes from durational measurements. Burger (1991) found a similar behaviour of short /ɑ/ and long /a/ in these phonetic environments, especially with regards to open, stressed positions in nonsense words with template structures CVC.CV(C).CV(C); only the vowels of the two final syllable types were measured; these syllables were open and closed (indicated by the use of brackets in this template); the vowels were alternatively stressed and not stressed. Results clearly indicate the existence of short /ɑ/ in final stressed position.

The most compelling support for accepting the stressed vowel /ɑ/ in Afrikaans as short comes from Modern Afrikaans. In this Afrikaans variety long /a/ in accented positions is strongly rounded to /ɒ/. This is not the case with stressed short /ɑ/ in the second syllable of words like patatta and countless others, which inevitably leads to the classification of stressed /a/ as basically short. This also applies to word-final /a/.