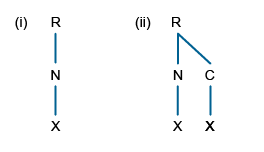 See The Long Vowels for examples of syllable trees for long vowels.

An important difference between the Dutch Class-B and the Afrikaans short vowels, lies in the given that, in Afrikaans, short vowels are permitted in open syllables word-internally as well as word-finally. By doing so, we reject the notion of ambisyllabicity, as is generally accepted in the Dutch literature.

Most of the short vowels tend to be reduced to schwa when in unstressed positions, see Vowel reduction.

In the following section examples of the short vowels of Afrikaans are presented.

The examples are mainly restricted to simplex words. Many multimorphemic, derived cases exist, however. a = the relevant vowel in a closed syllable; b = the vowel in an open syllable. Furthermore, (i.) provides an example of the vowel in word-initial position while (ii.) & (iii.) deal with the vowel in word-medial and word-final position respectively. Subsequently the frequency and nature of the most important short vowels receive attention.

Except for the two short vowels /y/ and /œ/ all the others are frequently occurring Afrikaans vowels. In this section we focus on the features of the four vowels /ə/, /ɑ/, /i/ and /u/ that make them different in one or another sense to their Dutch counterparts.

[+]Nature and frequency of occurrence of some short vowels
[+]Schwa /ə/

As is evident from the examples above, schwa /ə/ may occur in all syllable nuclei positions, unstressed as well as stressed, in open as well as closed syllables. It occurs frequently in word-final position. The schwa is, in fact, the most frequently used vowel in Afrikaans. Apart from acting as a full vowel in all positions, schwa very frequently functions as plural morpheme (cf. -e: boek-e /'bu.kə/ books; lemoen-e /lə.'mu.nə/ oranges) as well as an adjective in attributive position (cf. maklike /'mɑk.lə.kə/ easy). In terms of distribution and the phonological processes into which it enters, schwa functions much like the other short monophthongs of Afrikaans.

The short /ɑ/ occurs in every syllable nucleus positions and thus not only in unstressed syllables, as the case is in Dutch, thus also in stressed syllables (cf. Afrikaans patatta /pɑ.'tɑ.tɑ/ sweet patato and Wissing (2006)). The underlined vowel in word-final position in padda would have been long were this a Dutch word. Note, however, that both the vowel in singular form padda and in plural (paddas) and diminutive (paddatjie) forms are phonetically short. Therefore there is no motivation for the classification of unstressed a in word-final position as long, as in Dutch. Of course, underlying long aa in this position is always stressed, e.g. in karba /kɑr.'ba/.

Phonetic evidence in favour of acceptance of /ɑ/ as short in both stressed and unstressed syllable, closed as well as open, comes from durational measurements. Burger (1991) found similar behaviour of short /ɑ/ and long /a/ in these phonetic environments, especially with regards to open, stressed positions in nonsense words with template structures CVC.CV(C).CV(C); only the vowels of the two final syllables were measured; these syllables were open and closed (indicated by the use of brackets in this template); the vowels were alternatively stressed and not stressed. Results clearly indicate the existence of short /ɑ/ in final stressed position.

The most compelling support for accepting stressed vowel /ɑ/ in Afrikaans as short comes from Modern Afrikaans. In this Afrikaans variety long /a/ in accented positions is strongly rounded to /ɒ/. This is not applicable to stressed short /ɑ/ in the second syllable of words like patatta and countless others, which leads to the classification of stressed /ɑ/'s as basically short.

The phoneme /i/ is regarded as short in Afrikaans, occurring frequently in both stressed and unstressed syllables and especially in word-final, open syllable position, as an extremely productive diminutive suffix -ie, -pie, -kie, -tjie and -etjie (pronounced as [iki]). These allomorphs have as equivalent the Dutch allomorphs -je, -pje, -kje, -tje and -etje, all with final schwa (Booij 1995), thus lead to Afrikaans /i/ being a much more frequently occurring phoneme than the Dutch equivalent.

Short /u/ too occurs normally in word-final, unstressed position, e.g. in instances such as foto, eggo and saldo. In these, and other similar cases, no derived words, such as plural forms, with long /o/, as in Dutch, are present, thus the plural and diminutive forms of these and similar words are still realised is short /u/. Consequently, the diminutive form of foto is /'fo.tuki/, not /'fo.toki/. Other examples with word-final /u/ are: kommando; eggo; Outjo; risiko; sjello; dinamo; albino; tempo; Kaïro; kasso; Basoeto. Note that this situation is in contrast with Dutch, where similar word-final vowels, spelled with o too, are considered to be long /o/. Afrikaans has only a few genuine cases of stressed, word-final /o/ like buro, tablo, dinamo, Karoo.

Evidence from the process of nasalization (Coetzee 1977) of the short vowels in especially older Afrikaans speakers is e supportive of the classification of all the above-mentioned vowels as short, in contrast with the long vowels /a/, /e/, /o/, /ø/, that do not nasalise to the same extent. Also, nasalised short vowel phonemes are also lengthened considerably, in contrast to the long vowel phonemes which, should they be nasalised, are not lengthened perceptually and acoustically, being long already.

Cases where /i/ and /u/ as stem vowels behave like other undisputed short vowels in the formation of diminutives with -tjie are poel – poeletjie, smoel – smoeletjie, gevoel – gevoeletjie, karakoel – karakoeletjie; compare, for example bal – balletjie, pen – pennetjie, kol – kolletjie, pil – pilletjie. Contrary to these examples, -etjie instead of -pie as diminutive morpheme is forbidden for words with long vowels plus final /m/, thus raam – raampie (*rametjie), boom – boompie (*bometjie) and probleem – probleempie (*problemetjie). This argues against /u/ all belonging to the class of long vowels. Similar, though less compelling instances as to /i/ are present, for example kiem – kiemetjie (*kiempie), siel – sieletjie, wiel – wieletjie (*wieltjie). Sheltko (2006) provides more examples in favour of such an interpretation in the case of Dutch diminutive formation of words, with /i/, /u/, /y/ as base vowel. In this regard she finds support from De Haas and Trommelen (1993). Of special importance here is the assertion of the latter authors that genuine long vowels are never, as here, ambiguous in nature ("echte lange klinkers (zijn) nooit zo ambigu ...").

As is pointed out in the topic on long vowels, the infrequent occurrence of all long Afrikaans vowels ( /o/, /e/, /a/, /ø/) in open, word final position is in sharp contrast to the frequent occurrence of some of the short vowels ( /i/, /ə/, /ɑ/) in word-final open-syllable position. This fact is taken as extra motivation for deeming /i/ as being short.

By hypothesizing /i/ and /u/ as long vowels, thus occupying two syllable slots, X X, a problem is created with respect to the analysis of both pure and unpure diphthongs. Pure diphthongs ( /əi/, /œy/, /œu/), all ending in /i/ or /u/ would thus have a nucleus make-up of X X X, which is, of course, not allowed in view of the common phonotactic constraint of nuclei consisting of maximally two slots. The same problem is to be found in the case of unpure diphthongs, such as /ai/, /oi/ and /eu/ (in resp. raai, rooi, eeu) and even /ui/ (in roei). All of these are (non-permitted) X X X nuclear structures. A similar problematic situation is pointed out by Visser in the case of Frisian. Note, however, that Booij (1995) resolves this situation by seeing these diphthongs as ending in /j/ instead of the /i/-vowel.

A noticeable difference between Afrikaans and Dutch relates to the combination of short vowels with intervocalic fricatives. Whereas Dutch B-class vowels can only be followed by voiceless fricatives, this is not the case in Afrikaans. For Dutch only two examples are mentioned, namely puzzel and mazzel. In Afrikaans words with intervocalic /v/ are quite common. Except for simplex words such as duwwel /'dœ.vəl/ thorn, dowwel /'dɔ.vəl/ gamble, ewwa-trewwa /'ɛ.vɑ.'trɛ.vɑ/ a type of plant and kriewel /''kri.vəl/ itch, numerous cases exist of short vowel plus /v/ followed by schwa, thus rendering /və/. This is evident in the plural and predicative adjectives of monomorphemes ending in underlying /v/ ( attributive positions, for example riwwe (<rif+PL) /'rə.və/ reefs and krawwe (<kraf+PL) /'krɑ.və/ carafe; lawwe (laf +ADJ)) /'lɑ.və/ stupid; rowwe (rof+ADJ) /rɔ.və/ rough).