The rhyme (R) is an obligatory syllable constituent, which can optionally branch into a nucleus (N) and a coda (C).

In the case of the short vowels of Afrikaans, a minimum rhyme of one X exists (a nucleus without coda). A maximum of four rhyme positions is possible (see Figure 5), viz. the short nucleus vowel, and a cluster of three consonants.

Note that in the case of Dutch (Booij 1995; Trommelen 1984) a rhyme consists of at least two and maximally three positions. Note here that Dutch allows extra-long sequences of up to five consonants word-finally as in herfst /hɛrfst/ autumn, fall. Since those final consonants are always coronal obstruents, it has been proposed that these consonants do not belong to the coda but that they form an extra-metrical syllable appendix instead. Following this account, seemingly exceptional extra-long codas as in herfst or promptst [prɔmp(t)st] most prompt actually comprise two coda consonants (plus up to three appendix positions) in accordance with word-medial codas. All final coronals of 'coda clusters' should thus be assigned to an appendix position.

In the figures in the following sections present the possible Afrikaans syllable structures containing nuclei with short vowels. In subsequent similar sets of figures the same is done for the long vowels and the diphthongs.

According to Figure 1 a syllable may consist of only a nucleus, that is either a vowel or a diphthong. However, generally the unmarked syllable has a simplex onset too, but no coda, equaling the universal CV syllable. In the following sections the short and long vowels as well as the diphthongs acting as nuclei will be highlighted. This will be described in terms of possible syllable patterns, viz. CV, CVC, CVCC and CVCCC. This means that a rhyme may be consisted of a minimum of one X-position, up to a maximum of four XXXX's. Relevant Afrikaans examples are provided. Systematic rhyme co-occurence restrictions are indicated throughout.

In the subsequent descriptions the focus is on rhyme co-occurence restrictions. More specifically an ouline is provided on possible, unlikely and impossible combinations of nuclei with codas. The three types of nucleus are specified in terms of short and long vowels and diphthongs, and the codas in zero up to three consonants. For more details concerning the structure and content of these segments, see the relevant topics on nuclei, viz. short vowels, long vowels and diphthongs, as well as for the codas.

For cases where rhymes are constituted by only a short vowel as nucleus compare Figure 2.

Figure 2: CV structure of syllable with short vowel as nucleus without coda, with representative examples 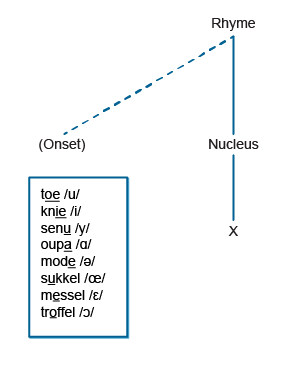 In the case of sukkel, messel, troffel the respective vowels / œ/, /ɛ/ and /ɔ/ occur in syllable final position, other than in Dutch, where the notion of ambisyllabicity is supported, and therefore prohibit short vowels in an open syllable. See Ambisyllabicity for a motivation. Therefore the syllable structure of these words are CV.CVC, viz. in /'sœ.kəl/, /'mɛ.səl/, /'trɔ.fəl/, and not CVC.CVC, as in Dutch.

Long vowels as well as diphthongs also occur without restriction in this syllable structure, for example:

Note that word final /ø/ only occurs ina couple of loanwords like keu and adieu. In word-medial, open syllables /ø/ is more frequently found in derivations, specifically plurals of words like neus ( /nø.sə/) and (reus /rø.sə/).

All short vowels may appear in syllables closed by a consonant as coda. All Afrikaans consonants bar / ɦ / appear in this instance (see Figure 3).

Figure 3: Structure of a syllable with short vowel as nucleus with single-consonant coda, with representative examples 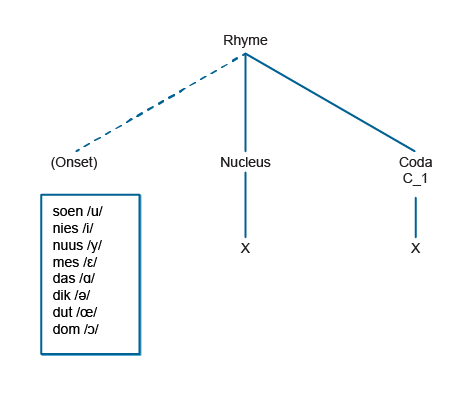 As is clear from the data presented in the exposition of short vowels elsewhere. CVC structures are also found in multisyllabic words, for example in boetseer /but.'ser/ model (v.) as initial syllable, or in pampoen /pɑm.'pun/ pumpkin as final syllable.

Both long vowels and diphthongs may occur unrestricted restriction in CVC-structures, for example:

Diphthongs' appearance in rhymes of the type CVC is somewhat restricted, especially in the case of /œu/; this diphtong only combines with obstruents /t/ and /s/, as in respectively hout and /sous/. boul, with coda /l/, does occur, but is a loan word from English bowl. Furthermore, /ŋ/, /ɦ/ never functions as coda consonant, and in this case, neither /ŋ/ nor /r/ may follow any of the three diphthongs.

All short vowels may appear in syllables closed by a subset of two-consonant coda clusters. See Figure 4 for examples, and Diagram 1 for all possible coda clusters.

Figure 4: Structure of a syllable with short vowel as nucleus with double-consonant coda, with representative examples 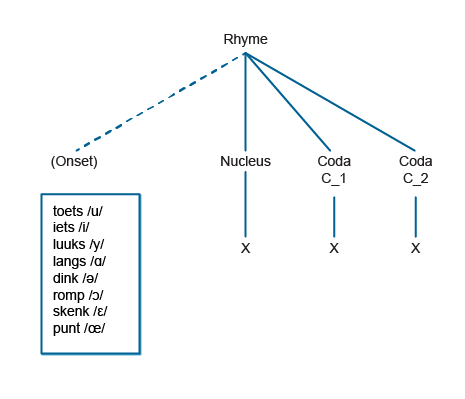 In the topic The Coda information is provided concerning the position of /s/ in coda clusters /-ps/, /-ts/ and /-ks/, with final /s/, particulars of coda clusters that are not allowed in Afrikaans, and finally also concerning unproductive cluster.

In principle all short vowels are possible in rhymes with CCC-codas. Figure 5 provides representative examples.

Figure 5: Structure of a syllable with short vowel as nucleus with CCC-consonant codas, with representative examples 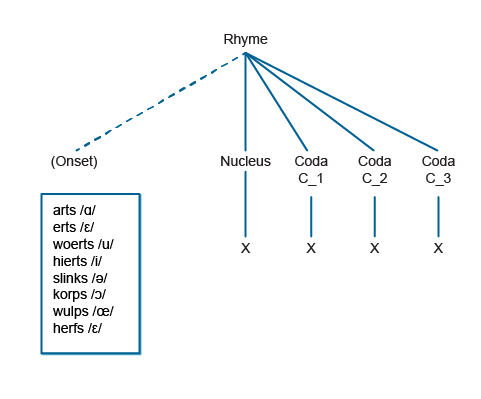 See the topic on the coda for details of consonant combinations in this position of the rhyme in Afrikaans.

References:
⇑ Back to top
ABOUT THIS TOPIC
Author(s):
Daan Wissing
Category:
Afrikaans Phonology
Publication date:
14 May 2020
Keywords:
phonotacticssyllablenucleuscoda
cite
print
report error
This is a beta version.
Jump to: