The Standard Afrikaans (SAfr.) speaker referred to below is a prototypical standard speaker and a prominent radio personality. In a recent survey she was nominated as the most appropriate speaker of SAfr. Participants (N = 344) in this survey were from all walks of life, male and female and of different ages and ethnicity groups /u/ of Standard Dutch (SNdl.) is shown alongside that of SAfr. Vowel information with respect to SNdl. /u/ is to be found in Taalportaal.

Where relevant, acoustic vowel information on the Afrikaans as spoken in Genadendal, Western Cape (henceforth abbreviated as GDAfr.), will be provided. On the basis of its important role in the historical evolution of Afrikaans it will here be taken as a prototype of coloured Afrikaans CAfr. There are, of course, many other variants of CAfr. The GDAfr. data is based on recordings of a number of aged female speakers of that town.

The /u/ is phonetically short. During its production the tongue body is to a degree retracted and raised with the tongue tip down. There is a reasonably large front cavity, but also a relatively large back cavity due to larynx lowering.

Figure 1 is an idealised depiction in an articulatory vowel chart. See Figure 2 for a realistic acoustic representation.

[click image to enlarge]
Both alternate sets of tongue height positions are indicated: (high – low) show the height of the tongue in relation to the oral cavity; (open – close) refer to the degree of openness of the mouth during pronunciation. The former set is used here and elsewhere.
[+]Acoustic features

The formant frequencies as well as the temporal values of vowels vary per speaker based on age, gender, speech community, and also according to speech rate and style. The vowel duration and quality of /u/ tends to reduce in rapid speech and in informal style, thus generally becoming shorter and tending in the direction of schwa. In normal pronunciation, Afrikaans /u/ is characterised by a relatively high F2, i.e. it is often notably centralised.

The /u/ is generally a short vowel phonetically, although mostly long before /r/. An average duration of 62 ms was found for the SAfr. speaker, measured in the phonetic context /s_s/, read in a wordlist style.

The following table and set of figures provide the formant features of the rounded close high /u/. In relevant cases information on Standard Dutch (SNdl.) as well as CAfr. with be provided. Vowel information with respect to SNdl. was found in the description of Dutch /u/ on the Dutch section of Taalportaal.

Figure 2 shows the position of /u/ relative to the other vowels of Standard Afrikaans. 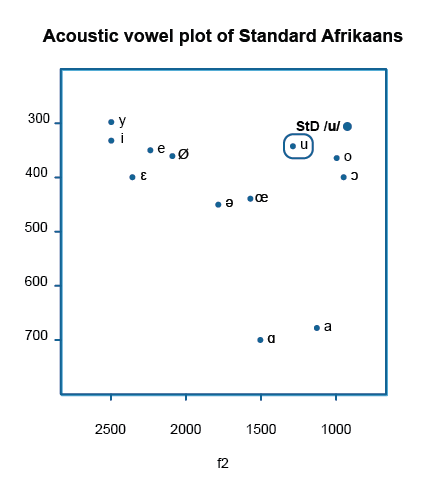 Listen to the pronunciation of the two nonsense words that were used in producing the wave form and the spectrogram.

The formant track of especially F2 is rather unclear in this spectrogram and is therefore shown separately in Figure 4.

Table 1 includes the formant frequency values of /u/ in Standard Afrikaans and Standard Dutch. Values are in Hertz.

Table 2: Formant frequencies for /u/ 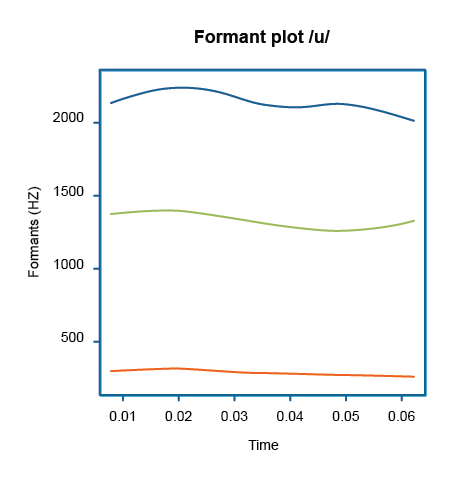 [click image to enlarge]
F1 is the red track at the bottom of the figure, F2 is the green track (and F3 the black one at the top). According to this plot, /u/ is not a perfect monophthongal vowel, although there is no general climbing or dipping in the track, as is typical of diphthongs, or diphthongised vowels.
[+]Phonological analysis of /u/

The phoneme /u/ has some distinct phonological characteristics, to be dealt with in the following sections.

The Afrikaans phoneme /u/, like /i/ and /y/, is lengthened considerably when followed by tautosyllabic /r/, as in boer /bur/ [bu:r] farmer and loer /lur/ [lu:r] to lurk. Some exceptions do exist, for example hoer /hur/ whore and oerwoud /ur.vœud / [ur.vœut] jungle.

Although nasalisation of all Afrikaans vowels has been a distinct characteristic of the vowel system for much of the last century (cf. Le Roux and Pienaar 1927) it seems to be much less the case in recent years, especially in the speech of younger persons. Practically no evidence is found in coloured varieties, as is evident in the pronunciation of Genadendal Afrikaans speakers.

As with other Afrikaans vowels, nasalisation happens mostly when /u/ is followed by the alveolar nasal /n/ + a fricative consonant, predominantly /s/. Though not exclusively, nasalisation is more to be expected when the nasal is tautosyllabic. Obviously this applies to /u/ too, for example in Woensdag /vuns.dɑx/ ['vũ:s.dɑx] Wednesday(Coetzee 1977).

[+]Diminutive formation and its importance for the phonotactics of /u/

Cases where /u/ as stem vowel behaves like other undisputed short vowels in the formation of diminutives with -etjie include poel – poeletjie, smoel – smoeletjie, gevoel – gevoeletjie and karakoel – karakoeletjie. Compare these, for example, with bal – balletjie, pen – pennetjie, kol – kolletjie and pil – pilletjie. Contrary to these examples, -etjie instead of -pie, as diminutive morpheme, is forbidden for words with long vowels plus final /m/, thus raam – raampie (*rametjie); boom – boompie (*bometjie); probleem – probleempie (*problemetjie). This argues against /u/ belonging to the class of long vowels. Sheltko (2006) provides more examples in favour of such an interpretation in the case of the Dutch diminutive formation of words, with /u/ (together with /i/ and /y/) as base vowel. In this regard she finds support from De Haas and Trommelen (1993). Of special importance here is the assertion of the latter authors that genuine long vowels are never, as here, ambiguous in nature ("echte lange klinkers (zijn) nooit zo ambigu ..." true long vowels are never ambiguous).

The very uncommon occurrence of all long Afrikaans vowels ( /o/; /e/; /a/; /ø/) in open, word-final position is in sharp contrast to the highly frequent occurrence of /u/ as well as most of the rest of the short vowels ( /i, ə, ɑ/) in word-final opensyllable position. Here the uncontested short vowels /ɔ/ and /ɛ/ are the exception. These facts are taken as extra motivation for deeming /u/ as phonologically short.

Furthermore, by postulating that /u/, together with /i/, is a long vowel, thus occupying two syllable slots, X X, creates a problem with respect to the analysis of both pure and unpure diphthongs. Pure diphthongs ( /əi/, /œy/ and /œu/), all ending in /i/ or /u/, would, on this analysis, have a nucleus make-up of X X X, which is, of course, not allowed in view of the common phonotactic constraint of nuclei consisting of maximally two slots.

The same problem is to be found in the case of unpure diphthongs, such as /ai/, /oi/ and /eu/ (in resp. raai, rooi and eeu, and even /ui/ (in roei). All of these would be, if /i/ and /u/ are long, (non-permitted) X X X nuclear structures. A similar problematic is pointed out by Visser in the case of Frisian. Note, however, that Booij (1995) resolves this situation by seeing these diphthongs as ending in /j/ instead of the /i/ vowel.

An interesting related phenomenon is the pronunciation of the /u/ vowel in word-final position, spelled o, as in foto above. Except for the clear short phonetic realisation, as in ['fo.tu], there are some compelling phonological and morphological reasons for taking this word-final vowel as short.

In these, and other similar cases, no derived words, such as plural forms, with long /o/, as in Dutch, are present, thus the plural and diminutive forms of these and similar words are still realised as short /u/. Consequently, the diminutive form of foto is /'fo.tuki/, not /*'fo.toki/. Other examples with word-final /u/ are: kommando; eggo; Outjo; risiko; sjello; dinamo; albino; tempo; Kaïro; kasso; Basoeto. Note again that this situation is in contrast with Dutch, where similar word final vowels, spelled with o too, are considered to be long /o/.